Slim Bootloader uses a layered model. The actual Slim Bootloader layer takes care of the system initialization. On top of this payloads are supported to provide the desired functionality.

Slim Bootloader can securely boot a hypervisor or operating system using IAS images (Intel Automotive Service image format). Tools are provided to create those images. This will simply launch the OS without providing runtime support to the OS.

Other payloads will be made available and it is possible to add custom payload or use LinuxBoot as a payload on top of Slim Bootloader.

Slim Bootloader contains a small, extensible shell that can be used for debugging and diagnosing purposes. It can be left out easily to save space or prevent security issues.

The first Eltan Slim Bootloader was implemented on the Intel Apollo Lake platform. Since then it is extended by other platforms supporting FSP 2.0.

The image below provides a quick overview of the architecture. 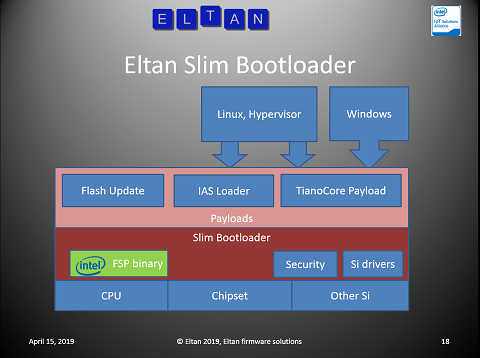